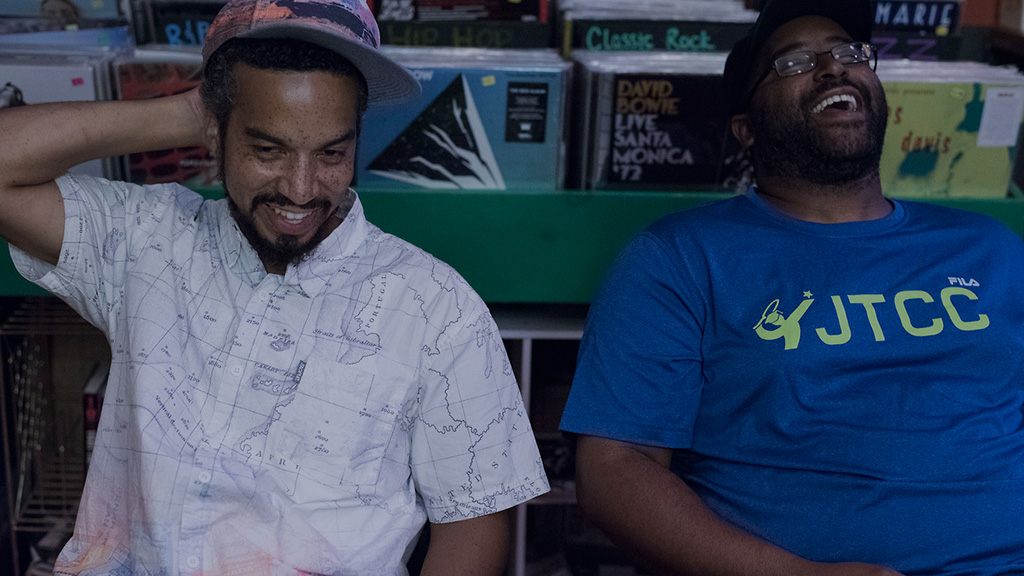 At Songbyrd, we support music exploration and appreciation in all its forms. One of our favorite reoccurring events is CAN I KICK IT? a project put on by our friends at SHAOLIN JAZZ. The short version of CIKI? is this: dope kung fu movies with a new, recut soundtrack, mixed live by DJ 2-Tone Jones, and featuring visual art from Gerald Watson.

In order to get to the bottom of the event, which is returning to Songbyrd on Tuesday 2/28, as well as what’s happening at SHAOLIN JAZZ all other days of the month, we asked Gerald and 2-Tone some questions. Here’s what they had to say. Read the interview below, and visit their site for more info on their programs.

SB: What is Can I Kick It? How long have you been running it? What inspired you to form this event?

SHAOLIN JAZZ: Can I Kick It? is a unique film experience in which cult classic martial arts movies are screened and set to a score of hip hop, funk, rock, soul and more mixed live by DJ 2-Tone Jones. The result is a live, remixed soundtrack to the films using select music and DJ techniques to accentuate elements of specific scenes and fight sequences. We first started Can I Kick It? about 2 years ago. We honestly didn’t know what to expect when we first tried it. We just thought it would be dope to try to fuse both the films and live DJ sets in a way that wasn’t commonly being done, but would also still make sense. Fortunately, since the first one each event has gotten better and bigger.

SB: What is Shaolin Jazz? Who is involved? What other types of events and offerings can fans of Can I Kick It? check out?

SJ: SHAOLIN JAZZ is a lot. The best way to describe it is a boutique creative group that explores the intersections between Jazz, Hip Hop and Martial Arts culture through a series of unique engagements and content development. Beyond Can I Kick It? SHAOLIN JAZZ also produces a DJ-led, live band performance of Hip Hop and Jazz fusion called SHAOLIN JAZZ L!ve; a multimedia lecture on the parallels of Jazz and Hip Hop culture; a pop-up visual art exhibition called Sound Patterns; periodic mix-tape projects featuring Jazz seamlessly blended with lyrics from the Wu-Tang Clan; a line of apparel and accessories featuring over 20 original designs; and (believe it or not) more.

SB: What artists can showgoers expect to hear at Can I Kick It? What is on the mix for 2/28? How do you pick the songs that fit the film? How many times do you have to watch the film to build a mix for it?

SJ: Showgoers can expect to hear a wide range of artists from Wu-Tang Clan and Red Hot Chili Peppers to Nina Simone and James Brown. This month I honestly can’t yet say who people can expect to hear. The process for selecting the music is very organic and mostly based on the vibe and tone of each movie scene. On average it takes at least 2 days to get it all together (it used to take almost 5 days when we first started).

SB: What films have you featured / will you feature? How did you get into kung fu movies? What is the connection between kung fu and hip hop?

SJ: We’ve featured a range of films, but some of our favorites have been 70’s classics such as 8 Diagram Pole Fighter, The Mystery of Chess Boxing, and Shaolin vs Lama. as well as contemporary classics such as Raid Redemption. We got into martial arts movies during the early to mid 80’s via a show called “Kung Fu Theater” which came on channel 5 on Sunday afternoons and would feature classic martial arts films from the 70’s. And in the 80’s ninjas and or ninjitsu became extremely popular where for a few years all anyone wanted to dress up for Halloween was a ninja, which expanded one’s interest in martial arts culture. Our love for martial arts films persisted throughout our teens, but the main connection between martial arts and Hip-Hop presents itself via a legendary rap group called Wu-Tang Clan. The RZA, the group’s leader and main producer, sampled those same martial arts films, featured on “Kung Fu Theater,” for tracks for various Wu-Tang projects and group members even derived their names from some of those same movies.

SB: What brands have you partnered with? Who do you have coming on 2/28?

SJ: Some of the brands that we’ve partnered with and featured for our pop-up shop include DC based streetwear brand Grindstone Universal; Double Down Kingz, a DC area artist collective; and Crowned, a lifestyle brand that specializes in head-wraps, apparel, and skincare goods.

SB: How does the Songbyrd drink program fit with Can I Kick It?

SJ: The drink program is pretty dope, as we have a base liquor, either a dark or light per month, and we then discuss with Alisha about cocktail ingredients that are specific to that movie as well as developing a name for the cocktail that’s also specific to the month’s feature film.

SB: How has DC supported Shaolin Jazz? How does Shaolin Jazz fit into the DC music scene?

SJ: DC has shown amazing support for SHAOLIN JAZZ and although fusing Jazz and Hip-Hop isn’t new, our fusion of Wu-Tang Clan and Jazz has never been done, so its been rewarding to see people support something different. DC also has incredibly strong musical roots, especially the Jazz scene which dates back to the 30’s, and the Hip-Hop scene is and has always been extremely diverse and progressive so our brand of music and events have been pretty welcome. And beyond the music scene, DC enjoys a thorough creative culture from photographers, to painters, skateboarders, even individuals who operate in the creative marketing space so we’ve enjoyed collaborating with and sharing our projects with a variety of groups of people. Because we speak, through our projects and music, the language of Jazz and Hip-Hop, and we make sure to deliver quality product, our niche has fortunately fit pretty organically into the DC music scene.